STIRNET HISTORIES is being replaced by a section that will contain pages that are more relevant to supporting Genealogical Research. This exercise was started in August 2015 and may take some months before it is completed. I apologise should this lead to any confusing loose-ends in the interim.

We wish you all a Very Merry Christmas, a Happy New Year, and all the very best for 2017.

This page has been cleared pending significant change to the site.

From 'Historical Atlas' by William R. Shepherd, published in 1929 in New York by Barnes & Noble. Downloaded from http://www.pitt.edu/~medart/menuengl/mainmaps.html

The following map was kindly made available by The Association of British Counties (ABC) through their web site at www.abcounties.co.uk. ABC is "a society dedicated to promoting awareness of the continuing importance of the 86 historic (or traditional) Counties of Great Britain". 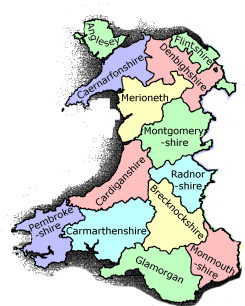 Across the centuries, the boundaries of the regions of Wales have varied considerably. Initially this was the result of battles for territory between the different tribes. More recently, it has been more for administrative & bureaucratic convenience. The map on the left shows the situation around the 12th century. The map on the right shows how it was at the end of the 20th century.

More information on Wales will be added in due course.