We are about to launch the new version of the site. Most of the changes will be obvious to anyone who knew the previous version at all well but some changes may not be. The reasons why a new site has been developed are reported on History of the site.

The 'look & feel' of the site is perhaps the most obvious change. The previous site had the following look from which you will see that the layout of the Families Database page has not changed but that the other pages are quite different. 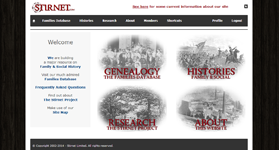 For reasons explained elsewhere (such as in the FAQs section), Stirnet Histories has been turned into a Blog which should make it easier to develop. The Research Area has been removed (though some of its content has been preserved elsewhere) so that 'The Stirnet Project' has been reduced to just The Stirnet Portal which we hope to develop into a major feature of the site. The Login & Registration systems have been combined & simplified with explanatory notes contained within the new system as well as on Membership FAQ. The Members Area has been renamed 'My Account' and simplified. The News section, that had previously been in the Members Area, is now available to all (as on this page). 'Important documents' has also...

This is where I report things like changes to the site - but not families recently worked on in the Families Database (which are reported in the page footer as well as Latest pages released).